Even though you may not realise why, right from the first moment of director Mike Tweddle’s A View From The Bridge, there is a sense of unease. How can a clearly working-class family unit surrounded by love and light have such an underlying tension? This is just one of the great qualities possessed by Tweddle’s first production as artistic director at Tobacco Factory Theatres.

The story of Eddie Carbone is a tragic one, as well as being fodder for regular revivals. In many ways, he is Arthur Miller’s Hamlet: likeable, driven yet ultimately flawed and someone whose downfall, one could argue, is self-inflicted.

Many of Miller’s works have similar themes, the strongest of which is his central character’s battle for their name. John Proctor wants to be left with his name. Willy Loman wants to hold onto his sense of self. Joe Keller wants to protect his family from his name and here, Eddie Carbone wants his name respected. By the time his lawyer, Alfieri (beautifully played by Tobacco Factory favourite Simon Armstrong) talks of Eddie’s ‘destiny’, you can’t help thinking that that job is not going to be an easy one.

Whilst Eddie’s family unit is everything to him, there are early signs that there is something rotten in the state of Brooklyn. Eddie’s ever-smiling, ever-attentive wife Beatrice keeps home life stable with a fire in her belly – but it soon becomes clear that, behind her smile, there are cracks that rapidly become voids.

Katy Stephens follows up her stunning Factory Company debut as Lady Macbeth with a firecracker of a performance as Beatrice. Her pain and gradual sense of loss throughout the performance is tangible. Flitting between the wisecracking Brooklynite and the wife begging her husband to talk to her, Stephens never misses a beat. 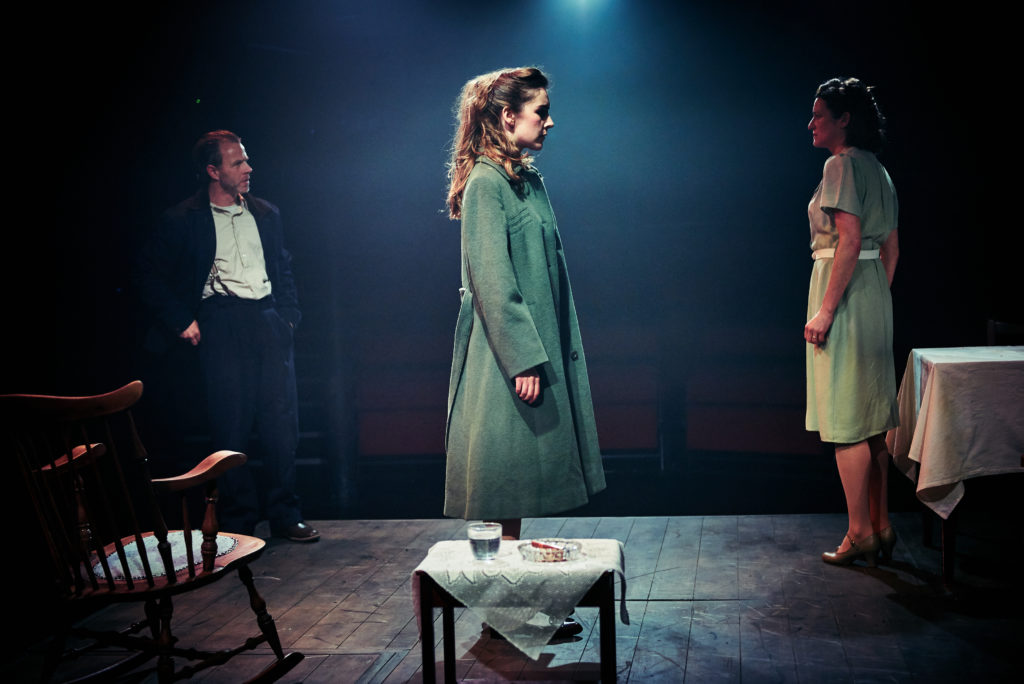 As Eddie and Beatrice’s niece Catherine, Laura Waldren embraces her character’s status of being no longer a child yet not quite a woman, expertly walking Catherine’s tightrope of a journey with great skill. It’s painful watching her natural exuberance squeezed out of her throughout the play. First her excitement over her job offer is overlooked, then her romance is taken as the catalyst for Eddie’s change. Waldren balances the guts and wisdom of a Brooklyn elder with the innocence and naivety of a child, leaving you to wonder what would have happened to her had her mother survived. 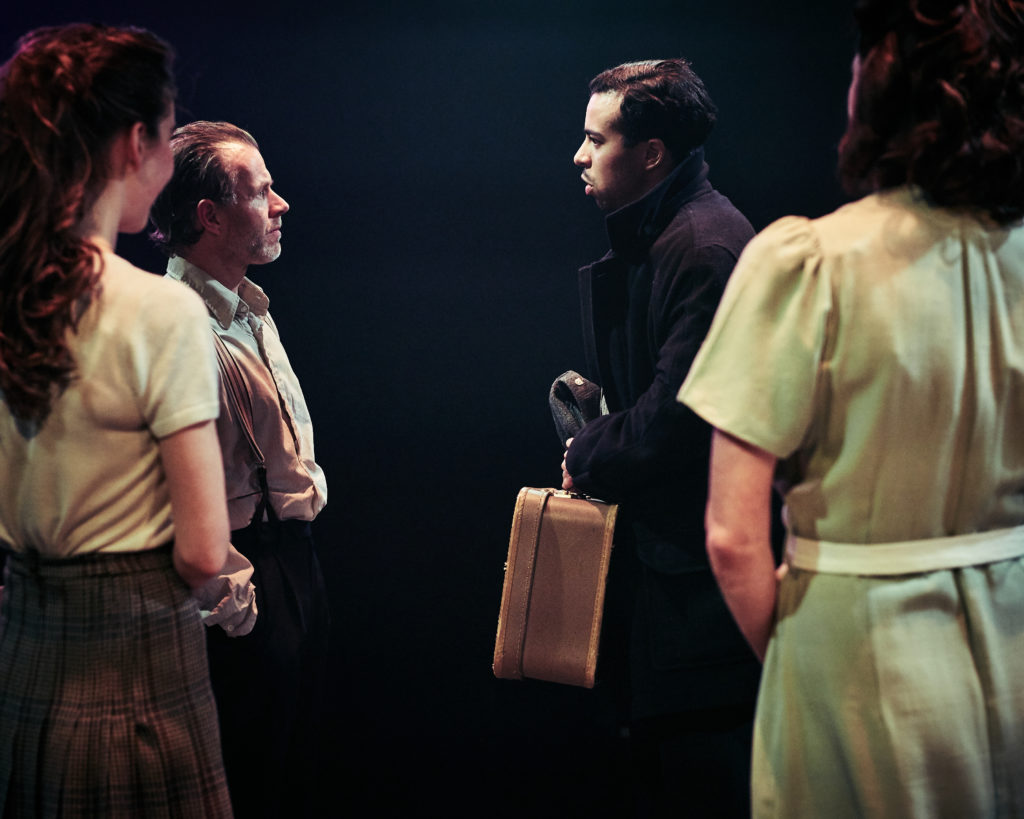 At the centre of everything is Mark Letheren’s powerhouse of a performance as Miller’s anti-hero Eddie Carbone. Letheren’s performance is so assured and so tightly wound that his audience rests on his every beat. Whilst he glides through the show with a sense of ease, his performance is so layered and finely woven that unpicking it would be impossible. 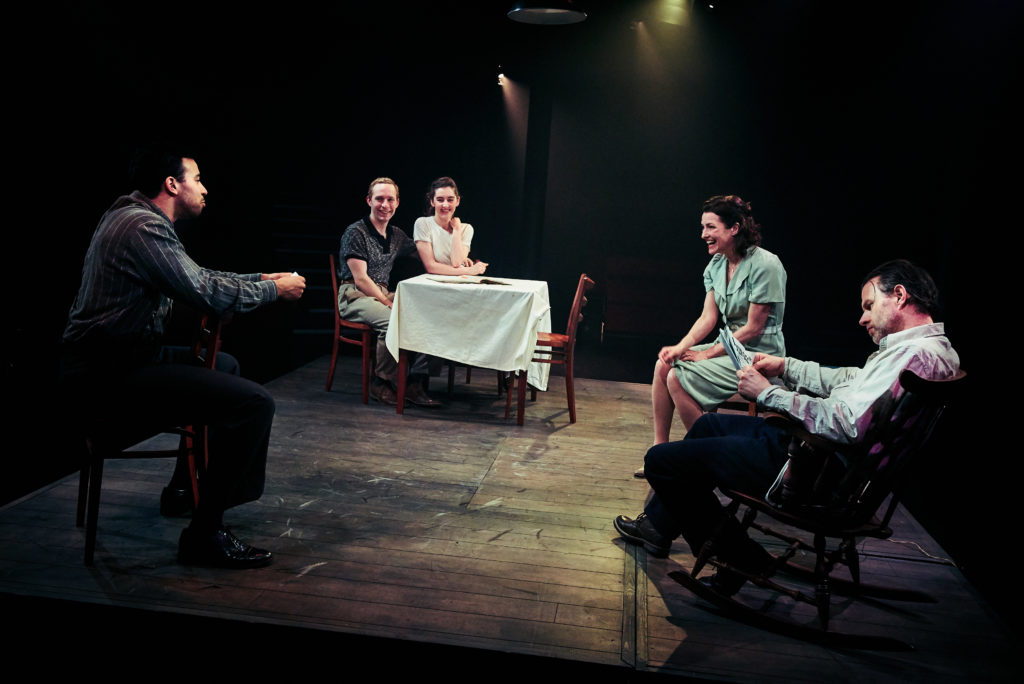 With this View From The Bridge, Tobacco Factory Theatres Artistic Director Mike Tweddle has made two very important and key moves. Firstly, and most immediately, he has orchestrated a piece of theatre so seamless, so beautifully directed that his own work is invisible. He has allowed the text to speak for itself, the actors to inhabit their characters – and has crafted a piece of theatre so carefully that all he has to do is now let it breathe. Secondly, and more long term, he has created a building block for the community, turning a receiving house into a producing house that has electrified its corner of Raleigh Road.

This is one of the most exciting pieces of work seen on a Bristol stage in a long time. Don’t miss it.

A View from the Bridge continues at Tobacco Factory Theatres until Sat, May 12. For more info and to book tickets, visit www.tobaccofactorytheatres.com/shows/view-bridge-arthur-miller

One thought on “Review: A View From The Bridge (Tobacco Factory Theatres, Bristol)”