Theatre Témoin use a Maya Angelou quote in their publicity: “The ache for home lives in all of us, the safe place we can go as we are not to be questioned.” That sense of nostalgia, the need for comfort comes at a cost when you have grown up in a hostile and dangerous environment. These are the demons that Jack deals with, living on the streets, every day.

The Marked has been devised through a series of workshops, work-in-progress sessions and consultancies with community organisations. It follows Jack’s experiences as he deals with the loss of his mother, life on the streets and encounters with angels and demons that are real, imaginary, human – and pigeon. Jack finds purpose when he meets Pete and Sophie and soon comes to realise that Sophie may just be the person he needs to protect, armed with his magic torch that has just come back to life. 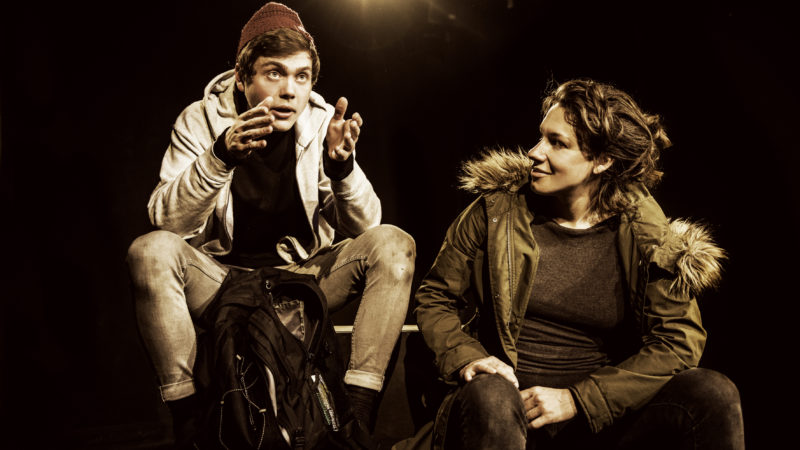 Part fantasy, part gritty realism, The Marked is told through a series of episodes that never finds a natural end but continues long after the lights have gone down. It has a big heart and has the ability to make you laugh out loud – and delve into your own closet of demons at the same time.

Combining physical theatre, puppetry and soundscape, the company makes brave choices, often sitting comfortably in its own silence, marking moments of desolation, peace and action with equal measure: and all the while leaving you to question your own version of what Jack calls “the safest place in the universe.”

Theatre Témoin have created an expressionistic, contemporary Waiting For Godot. It has a beautiful, big heart and deserves the widest audience possible.

The Marked continues at Tobacco Factory Theatres until Saturday, May 13. For more info and to book tickets, visit www.tobaccofactorytheatres.com/shows/the-marked